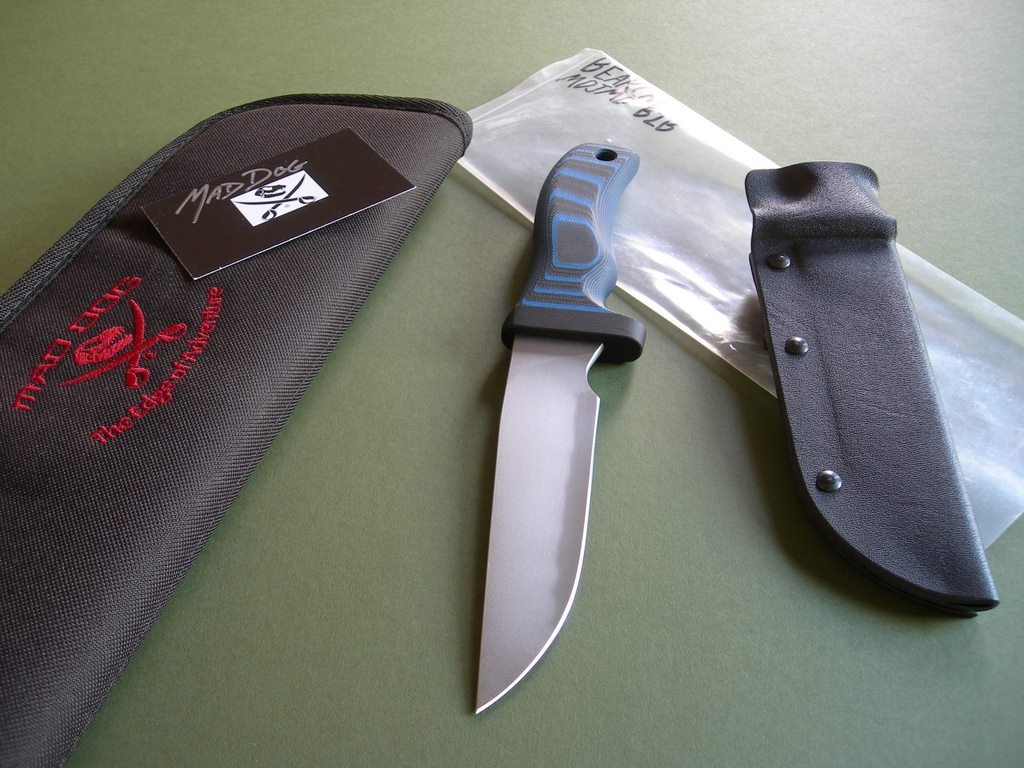 Summary: this is a Mad Dog Knives Bear Cat, an awesome EDC with 5-1/2" hard chromed blade made from 3/16" stock. VVTL blade finish (very visible temper line) with the small JMD logo -- this is an extremely good looking yet durable knife in stock and ready to rock. The black and blue composite handle is compression bonded to the hidden full tang and incredibly ergonomic. Overall length is exactly 10-1/8". Mad Dog trademark on the blade – custom ordered with the type 3 choil. Brand new, mint condition

The knife comes with the original highride sheath which is also brand new.

4 photos for review – as shown, an embroidered Mad Dog Knives carry case is included. This is an excellent knife for carry or collection / investment purposes, found a few comments on the internet about this model that I've included below. These Mad Dog's are the real deal, guaranteed to hold up under the heaviest of use. Just this one with the black / blue handle, don’t miss out. Thanks and good luck.

"Background: I spoke with Kevin McClung a while back and explained to him that I wanted to purchase a knife for my 40th birthday. The knife was to be a user, not a safe queen. I needed a basic utility blade suitable for everything from cutting rope to skinning deer; there was also the possibility that the blade could be carried for self defense purposes, but that was a far second to the utility aspect. I had been eyeing the Pygmy ATAK, but McClung was confident that the Bear Cat would serve my needs best. Bear Cat it is then!

The basics: All current MD knives are variations on a theme. Selectively tempered O-1, hard-chromed, with a composite grip. The cutting edge comes in at around 62 Rockwell hardness, while the spine is in the low 50's. McClung, in my opinion, has found a combination of materials, construction methods, and style that he has mastered. He has cracked the code, so to speak. The only nod to cosmetics are the occasional non-black colored grips and either the VVTL (very visible temper line) or the GTL (glowing temper line). The VVTL and GTL visually enhance the blade, but the blades are still hard chromed. I recently read a quote which said that perfection is achieved, not when there is nothing to add, but when there is nothing to take away. Mad Dog knives are certainly that. Knives which are built to be used and which are esthetically pleasing because they have been engineered and tweaked over time to provide the highest level of performance available. They are not purposely embellished. They are sleek, no-nonsense tools.

The Blade: Again, 3/16" O-1 steel, selectively tempered and hard-chromed. The Bear Cat has a full-flat grind. The edges along the spine are broken/radiused. The transition from blade-riassco-tang is made with McClung's Flying Buttress Plunge. This results in a space of approximately 1" from the front of the guard to the start of the cutting edge. At one point in time, I had an issue with this as it seemed to be not only wasted space, but a loss of leverage when cutting cordage. McClung pointed out that it is no problem to let the index finger fall in front of the guard and choke up on the blade Handling the Bear Cat bears this out. The Bear Cat balances right at the guard.

One big point for me is the complete lack of stress risers in the blade. I routinely note that many of the burly "combat/survival" blades on the market today are full of stress risers. Not to mention plenty of sharp corners and edges in places where the user will likely interface with the knife. This is a pet peeve of mine. The Bear Cat, however, is smooth everywhere except the edge. This is an example of how McClung's knives are very evolved designs and demonstrates the attention to detail.

The grinds on the blade are flawless. I looked very hard for uneven grinds and they were simply not in evidence. It is hard to believe that this piece of metal was shaped by a human hand. Again, I have rolled this blade over and around and simply cannot find a flaw in the grind lines at all. This is not hyperbole, but simply a plain fact. And oh yeah, it was good and sharp. As good or better than any edge that I have ever achieved using an Edge Pro for three years.

The Grip: Knife grips are a big deal to me. This is where the user interfaces with the blade. The best steel in the world is made less useful by a grip that does not work. The grip material is similar to G-10, but I do not think that is what it is. I'm not even sure if McClung will say what it is. The texture is grippy without being abrasive It completely encloses the tang of the knife and is bonded with some sort of epoxy from hell. There are plenty of stories about how durable the grips are and how well-attached they are. It ain't comin' off without a hammer and a chisel. McClung's pitch is that the handle will not soak up fluids and is unaffected by gas, DEET, or most other solvents. I'll take his word on that. I think they may even stand up to cleaning in an autoclave. The grip will also insulate the user in the event they inadvertently cut into a live wire.

McClung's grip design is among the most ergonomic available. It is comfortable regardless of how the knife is gripped. There are plenty of curves which let the user know the blade orientation without looking. I had discussed having McClung install a "thin grip" on the Bear Cat. He explained that the Bear Cat is a unique design and he does not offer the thin grip as an option on the Bear Cat. As it turns out, the standard Bear Cat grip is plenty thin. I have average - large hands and it fits me fine. There is a nice large hole for a lanyard. Even the edges of the lanyard hole are radiused. Again, attention to detail and a design refined over time. Speaking of the lanyard hole, while this blade is clearly not designed to chop, the grips design feels as though it will facilitate chopping by backing off the grip and using the lanyard for extra leverage. The grips sports a pretty substantial lower guard. I know there are folks who eschew guards of any sort - I'm not one of them. If you manage to slice your finger to the bone just one time due to a second of carelessness and the lack of a guard, you'll understand. The guard on the Bear Cat is substantial enough to do it's job, but not so pronounced that it gets in the way. My wife asked me to carve up some milk jugs which involved quite a bit of turning the knife this way and that I had no problems flipping the blade from edge up to edge down and back.

The Sheaths: Another of my pet peeves is crappy sheaths. A while back I bought a knife from a well-known maker. The knife was fine. The kydex sheath, however, was poorly engineered, cheaply made, and simply did not work well. I would have rather the maker not included it and knocked a little off the price. McClung fashions each sheath out of heavy kydex and industrial grade rivets. Each sheath is molded to a particular knife This is not an assembly line operation.

The standard high ride sheath secures the knife well. All edges are radiused and the knife rides high and tight. Whether by design or accident, the high ride sheath puts two layers of kydex between the wearer and the blade. I also got what McClung calls a slip sheath. This is a simple kydex taco that covers the blade and is retained by friction bearing at the top of the blade. The idea is that you stick the sheath and blade in your waistband. The kydex stays in place at the blade is drawn. Simple, elegant, effective. I did not think I would like or use the slip sheath much, but thus far, I have worn it daily. I wore it today while doing some plumbing work which entailed a bit of wallowing around on the floor - no problems I reckon that McClung fella knows what he's talking about.

Clearly, I'm impressed with this blade (thank the good Lord!). Prior to this purchase, I figured I would never contemplate the purchase of a second blade in this price range. However, I caught myself perusing McClungs offerings this morning trying to determine which blade would best compliment the Bear Cat. Well, I've got plenty of time to decide."